Bed time at the Irish Cottage For most cottage inhabitants, a stationary bed was a pure luxury that they wouldn’t even think to dream of. Sleeping arrangements were a necessity to be accommodated rather than a luxury to be enjoyed. Personally I just do not know what I would do without my comfy bed and have all kinds of added extras to increase the comfort levels from memory foam mattresses to electric blankets. How would I have survived back in the day…

Early and poorer cottage dwellers simply slept on thick woven straw mats by the hearth to take advantage of the dying heat. In the case of Byre cottages the inhabitants would sleep closely with the animals. The mat’s were then rolled away by day to make room for daily life – not too unlike modern beach mats.

The next step up was to low divan style beds where a mattress fashioned out of old woven fabric or meal sacks and stuffed with straw or bog cotton would was laid directly upon the straw mat. Wealthier and poultry farmers sometimes had mattresses stuffed with goose feathers – this would have been an exceptionally valuable asset in a household and would have been willed down through generations. Feather mattresses, pillows and even perhaps the bed would sometimes also form part of a daughter’s dowry or ‘bottom drawer’.

In areas prone to flooding these mattresses were lifted off the ground on a wooden base with low wooden header and footer boards to keep the mattress dry. These were known as thorough beds and could sleep the entire family head to foot. As fortunes improved these beds were put on truckles – little rollers or casters so they could be manoeuvred under the main bed to preserve space. 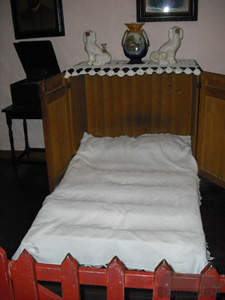 At their simplest the press bed was a mattress that folded out of a press by night and hid behind closed doors by day.

Larger more substantial press beds were known as box beds and could be recessed into the wall to disguise some of their girth. These were large enough for people to sleep fully inside them and some even had a smaller bunk bed built over the main bed for small children. By day these beds were used to store cloths and other items out of the view of the prying eyes of visitors. Also known as saddle beds or just simply the settle was a wooden bench that usually lived near the hearth. At night the seat area of the bench folded down to reveal a mattress and several members of the family might sleep here. The settle was also used to accommodate travellers or guests who might need lodgings and so the children would be banished to the attic. These types of beds were popular even in larger cottages and where there was wealth the carvings and wood could be quite ornate reflecting their probable origins from medieval castle kitchens. Car beds were covered in at the sides, back and roof by wood panelling and with a curtain at the front for privacy – these beds were most likely to keep the damp of the walls and ceiling from ruining the bedding. They also gave some privacy in a world without locked doors or often even walls.

The outshot or hag as it was known in some areas was an area of the external wall that protruded out from the main cottage wall. This usually measured around 6 foot by 3 foot to just about accommodate a mattress. Typical features of the northwest of Ireland – the outshot was beloved of the older generations who may be bedbound or in need of heat but were loath to leave the social hub of the hearth. From their resting place they could take part in the storytelling, gossip and generally oversee and impart their years of wisdom. A curtain could be closed across to give some privacy. These days the hag is used as a press or storage area in most renovated cottages. In poorer cottages the loft was left open to the hearth to take some of the heat and the children of the cottage with their nimble limbs negotiated the makeshift ladder to sleep there. The loft was also used as storage for meal and valuables that needed to be kept dry.

In larger cottages the loft was converted into a full bedroom with a narrow stationary staircase to access it. These rooms even had walls and a small window to allow in light. Windows in the gable ends of cottages were only ever on the first floor – never on the ground floor. At its most basic the sleeping accommodation for infant children was the bottom drawer of a chest of drawers lined with blankets and bedding. If the family could afford it they would have a wooden rocking cot created – a basic construction that could be rocked by the mothers foot as she spun yarn or knitted. The cradle would be passed down through generations and from household to household as needed. More wealthy families had Moses baskets commissioned by the local basket maker – and the humble Moses basket is still the modern mothers choice for newborns today! The new kid on the block – full Iron bed bases with Iron head and footer boards. Normally they had a wire base but sometimes strong woven twisted bog deal ropes were used or simple wooden planks to hold the mattresses. Despite the advances in technology people still held on to their thick woven straw mats to protect their precious mattress from the wire or ravages of the ropes. Over the years many of those wrought iron header/footer boards found their way to stopping a gap in a field – everything was re-purposed in cottage life. For most of the year I don’t know how I would function without it – even with central heating. Though it was not a feature in most cottages there was an old world form of a hot water bottle – a metal container with a stopper that was wrapped in old cloths and placed into the bed to keep the inhabitants warm in the depths of winter. These bottles could also be fashioned out of earthenware, zinc, copper and even wood -anything that would keep the liquid in.

Bedclothes were home made from knitting, woven linen, crochet, patchwork and simply sewn together meal sacks. Neighbours would also trade skills if there was a particularly skilled fabric crafts person nearby. In the case of feather pillows a tightly woven linen fabric was used that would be lightly waxed on the inside to keep the pointed ends of the goose feathers from poking out. Again a fine bedspread would form part of a woman’s dowry for marriage – these were the things that greatly mattered in life.

There are certainly lessons to be learned from old cottage bedroom furniture for the owners of studio flats and smaller 21st century cottages. Never underestimate the value of over head or under bed storage, you would be amazed at what can fit into a cupboard and a well positioned pair of curtains can solve almost all of life’s privacy issues… well almost all!